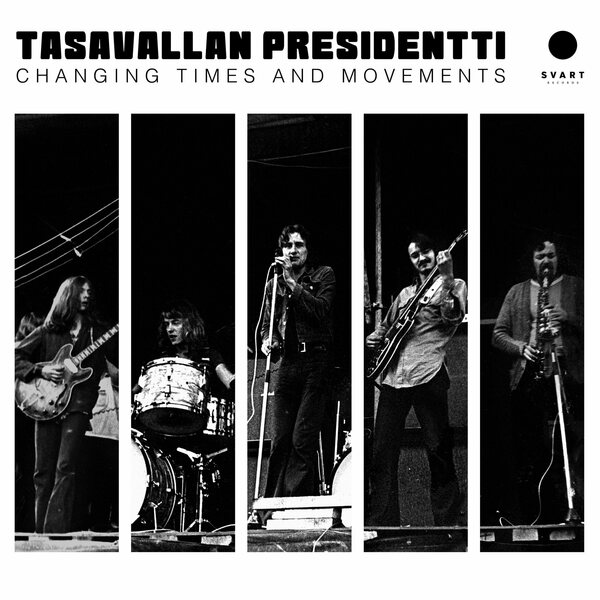 
Tuotteen kuvaus
Tasavallan Presidentti ‎– Changing Times And Movements - Live in Finland And Sweden 1970-1971
Tasavallan Presidentti were, together with Wigwam, the pioneers of the Finnish progressive rock movement. Svart Records have an ongoing archive project with the band, the first fruit of which was the Live in Lambertland record in 2019, now sold out. Next in the series is the live compilation Changing Times and Movements, to be released in April 2021. Whereas Live in Lambertland was a full live set with the band’s latter day vocalist Eero Raittinen, the forthcoming double album is a documentary of Tasavallan Presidentti’s early years with the English-born vocalist Frank Robson at the helm.
The record consists of three live recordings from 1970 and 1971. The earliest shows date from the first ever Ruisrock festival in Turku, Finland 1970 and the Skeppsholmen Festival in Stockholm, Sweden the same summer. The album finishes with a live appearance at the Poppop Festival in Lappeenranta, Finland in 1971. These previously unheard archival finds present a showcase of the formidable presence that Tasavallan Presidentti had on stage in the early days in their career.
Changing Times and Movements includes, in addition to live renditions of material from the band’s first two studio albums, six tracks the band never recorded. Whirlwind Nightmare, The Old Woman and Gigolo were eventually recorded by the Finnish rock singer Kirka in the Finnish language, but this is the first time they’re presented as Tasavallan Presidentti originals, in English. Going Back was a Frank Robson song which was abandoned when Robson left the band. Impressions of India ended up on Jukka Tolonen’s first solo album, and Ain’t Ya Coming Home is a Blodwyn Pig cover which the band often played live around the time.
Kappalelista:
RUISROCK FESTIVAL, TURKU, August 22, 1970
Produced by and recorded by the Finnish Broadcasting Company (Yle).
A1. ”GOING BACK” (3:38)
A2. AIN’T YA COMING HOME, BABE (13:31)
A3. TIS ME, TIS YOU (2:42)
SKEPPSHOLMEN, STOCKHOLM, September 5, 1970
B1. DEEP THINKER (3:04)
B2. TELL ME MORE (4:10)
B3. INTRODUCTION / DRIVING THROUGH (17:25)
C1. TIS ME TIS YOU (2:11)
C2. AIN’T YOU COMING HOME, BABY (15:08)
LAPPEENRANTA, May 8, 1971
Produced by and recorded by the Finnish Broadcasting Company (Yle). Hosted by Pentti Kemppainen & Calle Lindholm.
D1. WHIRLWIND NIGHTMARE (3:42)
D2. DEEP THINKER (4:05)
D3. THE OLD WOMAN (6:31)
D4. IMPRESSIOS OF INDIA (5:34)
D5. GIGOLO (3:29)
Levy-yhtiö: Svart Records
Julkaisuvuosi: 2021