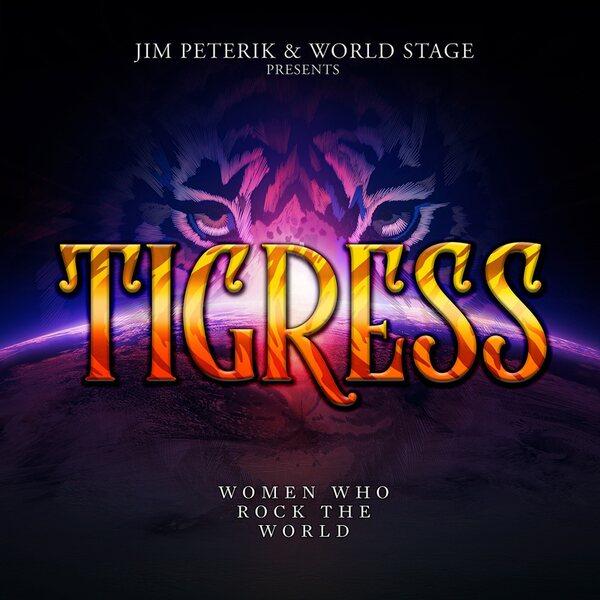 Frontiers Music Srl is proud to present the latest stroke of musical genius from the inimitable Jim Peterik: Jim Peterik & World Stage "Tigress: Women Who Rock The World". The album will be released on November 5, 2021. The concept behind "Tigress: Women Who Rock The World" is that Jim wanted to showcase women in music whom he admires. The seeds for the album were planted in late 2020 when Serafino Perugino, President and Head of A&R for Frontiers, reached out to Peterik to see if he wanted to start work on a new World Stage album. A light bulb went on in Jim's head and he said "Ya know, Serafino, how about a Women's World Stage album?" They both loved the idea right off the bat and thus the initial steps for the album began. Peterik has always loved a musical challenge and pursuing new ideas and the fresh idea for this album really inspired him. He made a wishlist of artists he wanted to work with and began crafting musical ideas that could work for their styles. In Jim's words, "I discovered that I needed to write songs that reflected the female perspective more than the male. It was gratifying when talented women from all over the world, heroes of mine such as Janet Gardner (ex-Vixen), Cathy Richardson (Jefferson Starship), Jenniffer Batten, Mindi Abair, Kate French, Kimi Hayes, Chez Kane, Rosa Laricchiuta (Black Rose Maze, Trans-Siberian Orchestra), and so many others gave me the big thumbs up! Up-and-comers like Lindsay Kent, Leslie Hunt, Chloe Lowery, Marine Lacoste, and so many others all added their unique personalities to make this a landmark album in my career." The full list of performers on the album can be seen in the tracklisting below. "I hope you enjoy Tigress: Women Who Rock The World" as much as I enjoyed creating it. Much love and Rock & Roll!" concludes Peterik. Jim Peterik, through the years, has written or co-written some of rock's most memorable songs: "Vehicle" by the The Ides Of March (on which he was lead vocalist, guitarist, and songwriter), "Eye Of The Tiger," "The Search Is Over," "High On You," and "I Can't Hold Back”, hits for .38 Special such as "Hold On Loosely," "Caught Up In You," "Fantasy Girl," and "Rockin' Into The Night", "Heavy Metal" with Sammy Hagar, and many many more. Peterik, now a part of Pride of Lions with vocalist Toby Hitchcock, is one of the most esteemed and loved recording artists and songwriters, not only on the Frontiers label, but in the larger melodic rock community.